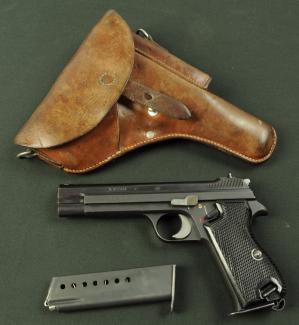 This SIG P210-2 appears to be an early Swiss Army pistol with the transitional period slide release. It includes 2 magazines and a leather sling holster. Some marks and holster wear, but retains its original blue. This is a beautiful set for a collector of the most accurate production pistol.
Brief History:
The SIG P210, pistol has earned the distinction of being the most accurate and most expensive military pistol ever made. Also adopted by the army of Denmark, as well as the West German Border police (BSG – Bundesgrentzschutz) and some Swiss police units, this pistol was later converted with a series of sport modifications, and a great many shooting matches were (and still are) won with this gem of workmanship.